How to best enjoy your homemade pasta sauce. 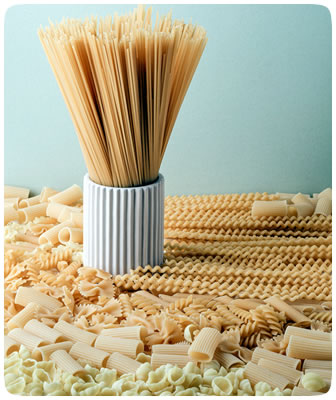 You have just finished making your famous fresh tomato sauce. What’s next? The only way to truly enjoy your fresh sauce is with fresh homemade pasta. I know what you are thinking, homemade pasta is hard. With the right tools, homemade pasta is quick, easy and most importantly super delicious. There are so many pasta shapes to choose from, where to start? We have gathered up our data to provide you with a guide to help choose the right pasta shape for you.

The world of pasta is a wide and varied place. As such we have prepared a listing of the most common types of pasta you will encounter during your endeavors in the realm of cooking. Each type is grouped by general style be it: long, short, or stuffed and provided with a small individual description. At the end of each grouping is a basic recipe for pasta preparation using the Marcato series of pasta making machines such as the Marcato Atlas Wellness 150 in mind. We here at Artisan Cooking hope these lists and recipes prove useful in kick-starting your pasta making adventures.

Of all the types of pasta in the world none are more multi-shaped than lasagne. Lasagne is usually prepared in layers to make oven-baked pasta dishes, but it can also be prepared in a number of other ways for a more expansive list of dishes such as: being rolled up for cannelloni or cut into squares for ravioli, tortellini, or farfalle.

Fettuccine or tagliatelle are a type of home-made pasta that is suitable for a number different preparations and condiment choices. Usually Fettuccine is considered a first course dish and is often served with meat, fish or vegetable sauces for superior tasting meal and greater aesthetic appeal.

Tagliolini or taglierini are among the thinnest type of egg pasta, coming out of Italian cuisine. It is notable as a rather fast-cooking pasta, which is great for when you want a quicker meal prep. Due to the thin nature of Tagliolini it is better to pair with light sauces, delicate condiments or even broth.

Bucatini are a type of long pasta that resembles a bigger, hollow version of spaghetti. Notable for coming out of the city of Rome, Bucatini is traditionally paired with Amatriciana as the condiment par excellence. Bucatini is however also easily combined with other strong and simple sauces thanks to the inherent heartiness of the pasta.

Lasagnette are a type of flat ribbon like pasta similar to a smaller version of lasagne. It is perfect for tasty and refined first course dishes. This is largely thanks to ribbon like shape that is easily combined with some particular sauces for a dish that is especially pleasing to both the eyes, and the palate.

Bigoli is traditionally a Venetian style pasta which typically looks like thick spaghetti. Of particular note is the pasta’s inherent roughness which when combined with the thick nature of the noodles, results in a pasta that can easily absorb all sorts sauces and condiments. This in turn allows Bigoli dishes to boast an incredible range of rich favors for the discerning palate.

Capellini are among one of the thinnest types of pasta coming out of Italy: at a mere 1 mm in diameter. This particular pasta typically looks like long filaments which has earned it the name “Angel Hair” in some circles and is traditionally used with light condiments to help balance out larger meals.

Linguine are a pasta type that is typical of Genoese cuisine and look like flattened spaghetti noodles. Because Linguine it is flat, it is usually combined with very fresh sauces or paired with some sort of fish.

Mafaldine are a flat ribbon like pasta with zigzag edging that is typical of Neapolitan style pasta. This pasta is particularly notable due to it’s name which comes from Princess Mafalda of Savoy because it is so similar to the shape of lace used in the dresses of queens. Fittingly the pasta itself is best combined with more delicate sauces.

Pappardelle are a very wide and flat type of pasta with small zigzag edges that is typical of Tuscan cuisine. Pappardelle is notable for being rough to the touch, with a rich and strong taste. Due to the shape and sheer size of this type of pasta it is usually paired with full bodied condiments, such as meat and game based sauces.

Reginette is a cousin of the Mafaldine style pasta and as such shares the refined long flat shape, and the zigzag edges. It is however larger is size and style in comparison to it’s cousin which allows Reginette to be combined with richer recipes and unusual pairings.

Spaghetti are the most famous type of pasta in the world with it’s numerous thin, round noodles. It is that same thin round diameter that makes it suitable for all types of condiments and sauces which inevitably results in dishes that will be sure to impress.

Spaghetti Chitarra are the best known type of pasta to come from Abruzzo. Despite the name this pasta is more similar to tagliolini style pasta, but with a thicker and square shape. Thanks to it’s shape this pasta particularly great with meat sauce or other thicker sauces.

Vermicelli are one of the oldest known types of pasta, and originally out of the Campania region. Vermicelli typically has a thin noodle like shape with round cross-section and a diameter of 1 mm, and is traditionally made with durum wheat flour. It is also notable for it’s varied preparation depending on where in the world it is prepared. For example Italy and England subscribe to different thickness standards or a number of Asian counties using it as the base for an assortment of “Rice Vermicelli” dishes.

Trenette are a type of pasta shaped into flat ribbon like noodles that are of Ligurian origin. The square cross-section and width make Trenette quite similar to linguine. This style of pasta is great for light, tasty sauces but in reality Trenette was really created for those who absolutely love pesto.

We will have articles of interest for our products that will help our customers.